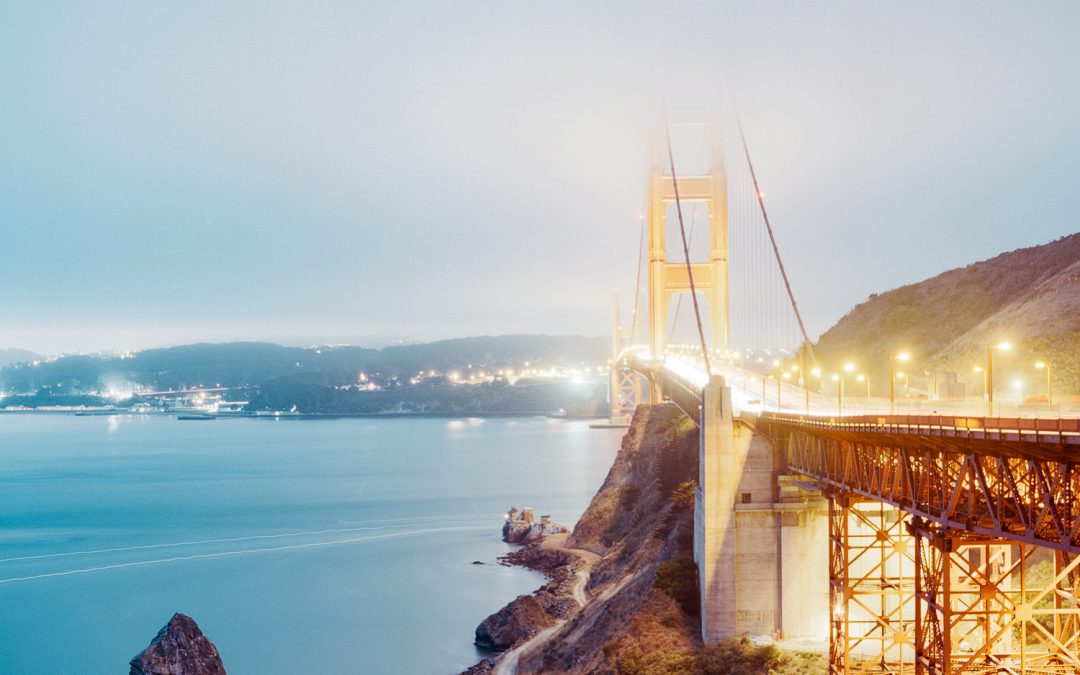 Text and photos by Sebastian Schlueter

After many years it still fills me with great joy to take photos in the dark. In the meantime an old Hasselblad camera has become my constant companion and the pictures are no longer digitally, as at the beginning of my adventure, but analogue on film. As soon as the last rays of the sun can be seen in the sky, an exciting time begins, which ends with the sunrise.

When Jörg asked me for a few lines for the MeinFilmLab blog on the subject of night photography, I was very happy to agree and only later realized how complex and varied this topic is. I have resolved not to go into too deep detail, but still give practical tips and help to everyone who is interested in this topic.

Why should you take photos at night at all? Landscapes, streets and buildings have a very special charm on me at night. The stars, the moon, the street lamps and neon signs, the contrast between day and night, of busy places where thousands of people cavort during the day, and the deserted scenes at night have always been a particularly exciting motif for me.

We are used to seeing our surroundings during the day. A photograph of this well-known motif at night opens up a new world to the viewer.

Many photographers who deal with night photography or long-term photography have relied on the medium of film for years. Until recently, modern digital cameras were equipped with CCD sensors, which have a lot of noise during long-term recordings. Although film has the famous grain, this is not intensified with long exposure times and therefore there are no restrictions with regard to the exposure time when recording film.

The latest generation of digital cameras have CMOS sensors, which makes them much more suitable for long exposures.

Still, the beauty of long exposure remains on film. The appearance, the distribution of the tonal values ​​and the deliberate shifting of the colors make an analogue night shot something very special. But it’s not just aesthetic aspects that speak for the medium of film.

In particular, the ability to depict the high contrast range of a night scene show the advantages of color negative film. The exposure can be chosen within a certain framework, as it corresponds to the creative picture idea and often you do not get any problems with overexposed highlights.

How do you proceed to immortalize successful night shots on film? First, there is the choice of footage. We have slide film, color negative film and black and white negative film at our disposal. Each film has different characteristics that must be taken into account when making exposure.

For a long time I have chosen color negative film, especially Kodak Portra 400 or 160. These films are especially suitable for scanning and offer a wide exposure latitude, which makes working with little light a little easier. Of course, other professional films are also suitable for night shots. I would advise against cheap films.

Of course, this choice lies with the photographer and the desired quality or the desired image effect. Choosing the right film is always an artistic decision. 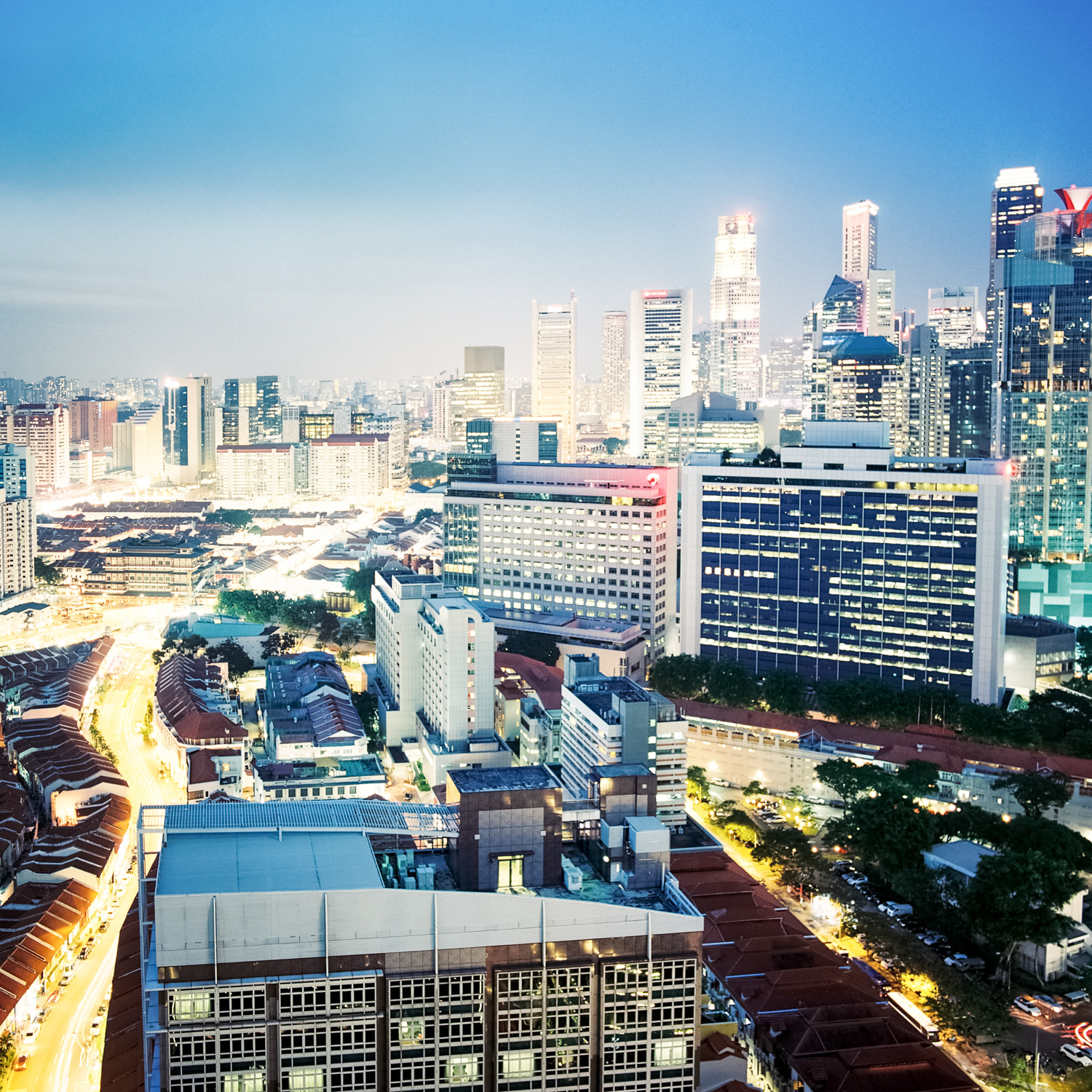 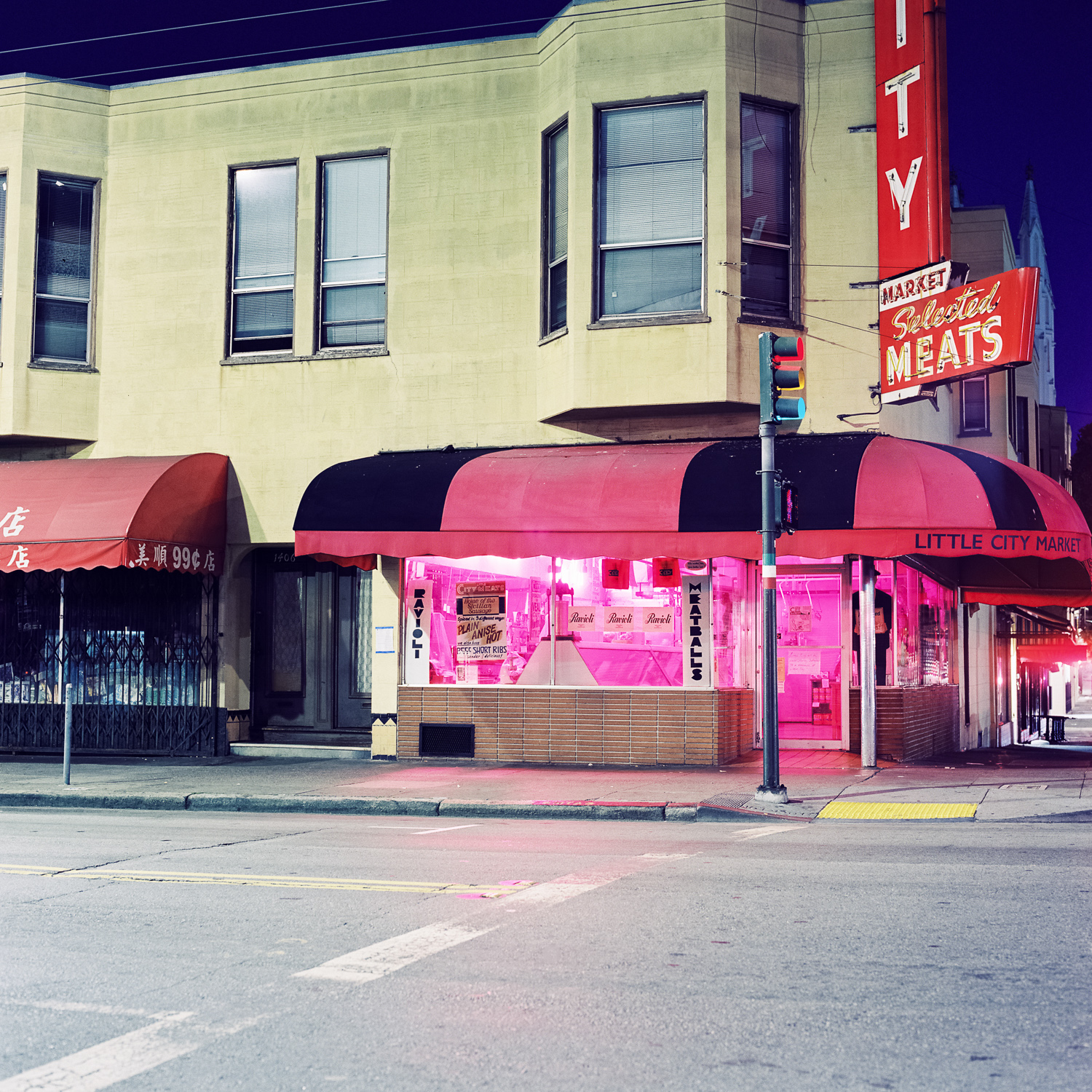 Of course, there are a few things to consider for beautiful night shots. Basically, film reacts to light and at night we either have to look for light or exposed objects, or leave the shutter of the camera open until we have collected enough light. A good and very stable tripod is essential for this. Exposure times of well over a minute up to several hours quickly result.

However, these are not usual for ultra long times. I usually expose color negative film for 40 seconds up to 10 minutes, because depending on the brightness of the subject, other values ​​result. Determining the exact value is not trivial, but it should not be used as a science. It’s good if you develop a feeling for it over time.

Even at night, buildings or objects are often well lit and the exposure times are significantly shorter. It is different if one is dependent on the moon or other weak light sources. A light meter is an important aid on night-time excursions.

For exposure metering at night I recommend a hand-held exposure meter or alternatively a spot exposure meter. With a little practice, you can also work with "exposure values". Typical values ​​for night shots range from an "EV -1" for lightly lit scenes to an "EV 4" for more heavily lit scenes. The "EV value" describes an absolute brightness value that is converted into a f-stop time combination using a table.

This method is particularly suitable for a plausibility check. For example, an "EV +1" results in an exposure time of 15 seconds for an aperture of 8 with a sensitivity of ISO 200. If the measured values ​​differ significantly from the estimated values, it makes sense to measure again to rule out an incorrect measurement to be able to.

The handling of a light meter is not trivial, especially in low light. Many devices no longer work in very little light. In general, a handheld exposure meter measures the ambient light on the subject towards the camera.

In many situations, the subjects are far away and it is not possible to measure the ambient light. Although it is the most reliable method of measuring exposure for color negative film at night, it is therefore ruled out in many cases. Spot exposure metering on the shadow areas of a subject is a good alternative. When using color negative film, the highlights are normally uncritical and so you always have to choose the shadow areas as a reference in order to avoid underexposure.

The exposure will therefore be chosen so that there is enough drawing in the shadows. Based on the zone system, the measured value with a spot exposure meter should be placed at least on zone III, possibly even on zone IV. The resulting value ensures a balanced exposure for the entire picture.

The measurement of the shadow areas of a subject resulted in an EV value of -1. Since this is placed at least in Zone III, the exposure time of the subject has a value of "EV + 1" (Zone V). Zone V corresponds to a medium gray value and is two exposure levels above Zone III. In this example the above-mentioned exposure time of 15 seconds results with an aperture of f / 8.

It makes sense to make a note of these values. I tried different values ​​over a long period of time and created my own table. This makes your work much easier.

In order to stick to the example already given, the determined exposure time of 15 seconds still has to be corrected. The corrected time can be found in the data sheet for the film. For a Kodak Portra 400 this would be a new time of 40 seconds (check.).

This example alone shows how important it is to make this correction.

The shift in proportionality does not affect all layers of a film equally. This also leads to color shifts that can later only be corrected to a certain extent during the scanning process or when printing. For me, this shift into the surreal is one characteristic that makes photography with film at night so exciting. 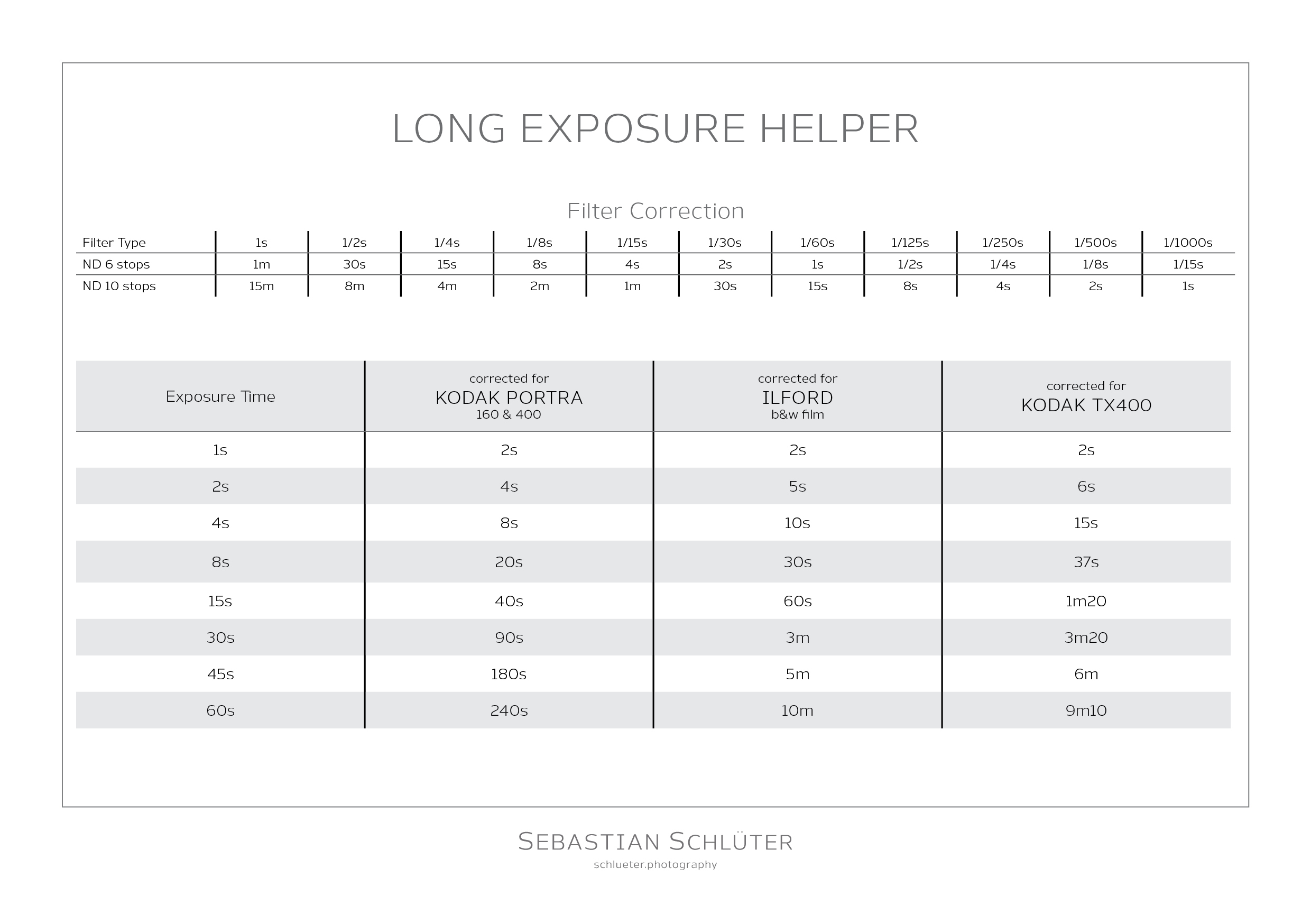 For night shots, however, it is not the only decision to calculate the exposure time correctly; the choice of aperture should also be carefully considered. It contributes significantly to the later expression of the image. A wide-open aperture offers the advantage that more light hits the film and we can expose for a shorter time, but we have to work with the smaller depth of field.

For my photos I often use an aperture of f / 8, which is a good compromise with regard to the mentioned aspects. 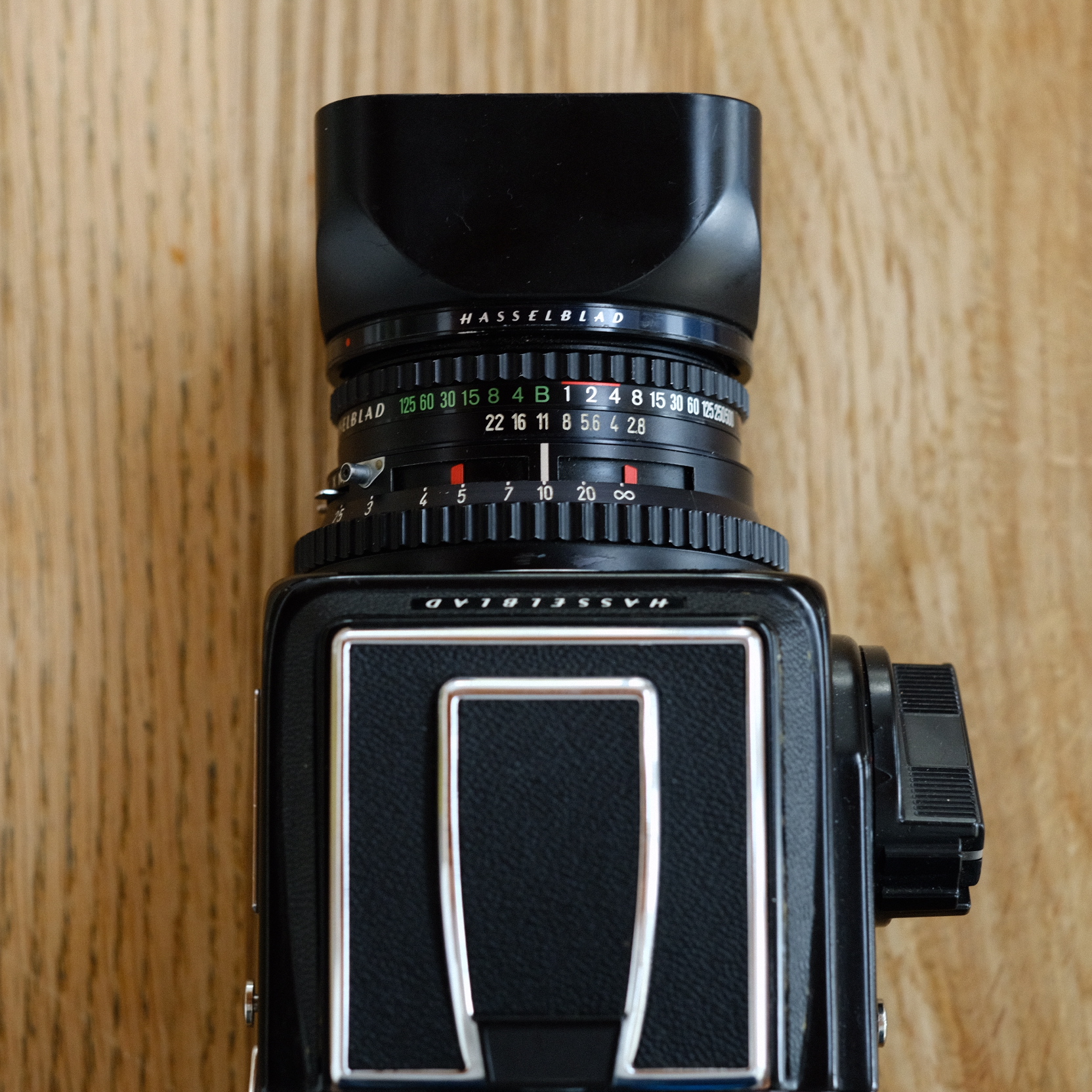 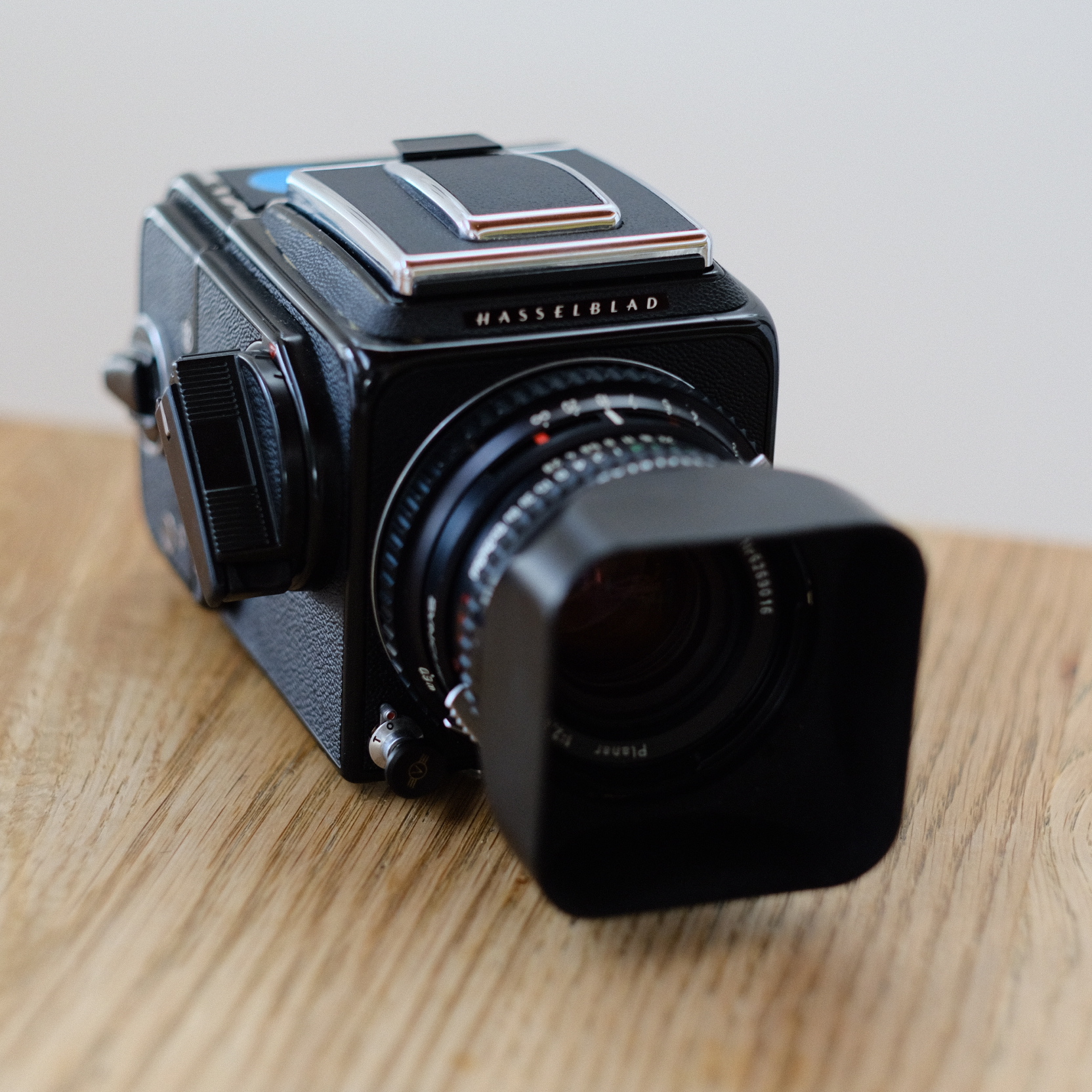 As already mentioned, our choice of aperture affects the expansion of the depth of field in the later image. Determining the working aperture for a night scene is difficult because the subject may only appear faintly on the screen and manual focusing is difficult. Cameras with autofocus may also have difficulties in focusing the desired image section.

Basically, it is easier to focus on lighter areas of the image than it is to focus on dark areas of the image. Sometimes you have to estimate distances in order to be able to work. In principle, the working aperture is determined with the help of a depth of field scale on the lens. Unfortunately, not all lenses have this scale.

First we focus on the most distant point, which should still be in the focus area, and note the value. Then this process is repeated for the near point. The working aperture is then selected so that the two values ​​determined are within the depth of field.

Another possibility, which is particularly helpful for very weakly lit subjects, is to focus on the hyperfocal distance. An explanation of this technology would definitely go beyond the scope of this article.

At the beginning of the article, I already mentioned the importance of a stable tripod. A cable release or the like is also irreplaceable. to use. The vibration when the shutter is released can render any long exposure unusable.

However, you must also ensure that the tripod is not moved during the exposure. That sounds easier than expected, because it often happens e.g. on bridges to shocks you don’t expect. It is also important to ensure that the ground is solid, so a tripod that is constantly sinking into the sand cannot deliver a sharp picture.

The possibility of many cameras with mirror lock-up should also be considered.

At the end of my contribution, I would like to go into the choice of the motif. Basically, a motif is subject to the same compositional ideas, whether it is taken by day or night. Often there are compositional traps hidden in the darkness that escape our attention. A precise analysis of the surroundings and the image content is therefore very important, because objects that are hidden in the dark may come to light with longer exposure times and can ruin a wonderful composition.

The contrast between light and darkness is interesting. A motif without a light element can quickly appear boring. Working with different color temperatures is often particularly interesting.

A bright and warm illuminated window in a cool, bluish ambient light has the effect of e.g. particularly exciting and pulls the viewer under its spell.

With this brief insight into the selection of motifs, I close my contribution. I would be very happy if I encouraged some readers to take photos even at night in order to explore the world in the dark. Have fun!

The pictures in this article are from my new series "Tiger Striped Skies" (Link) and were partly taken with a Hasselblad 500cm and a Rolleiflex 3.5F on a Kodak Portra 400 and 160, respectively.

Can you stall a gasoline engine in 2nd gear or higher?

Lentil stew with sausages: this is how it tastes like grandma’s